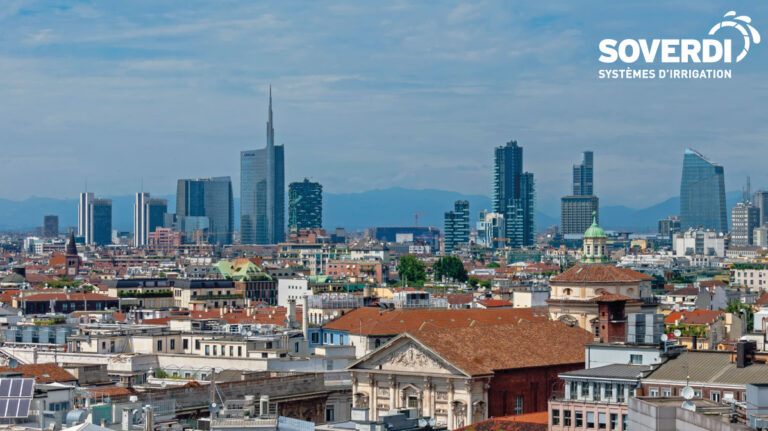 Last week, a meeting took place in Milan between the management and the Board of Directors of the LINDSAY Irrigation group and 4 distributors representing their markets (Sudan, Russia, Portugal, France). SOVERDI, with its manager Patrice Gallien, presented the French market as well as SOVERDI’s activities in the fields of irrigation and water treatment. Discussions also focused on strategies and developments for the coming years.

As a reminder, the LINDSAY Irrigation group includes among others the pivots brand ZIMMATIC, the reels brand PERROT, the remote management tools FieldNet, and the decision support system FieldNet Advisor.

It was also an opportunity to retrace the history of the partnership between SOVERDI and the American brand, originally from Nebraska.

SOVERDI is specialized since 1983 in the study and installation of irrigation systems. The relationship with the LINDSAY group is strong, since SOVERDI is the historical importer of the pivots brand ZIMMATIC in France. With its strong presence in the South West of France, SOVERDI has already installed more than 730 ZIMMATIC pivots. In addition, 125 FieldNet systems installed by SOVERDI are currently in operation. Soverdi has also received the Lindsay quality approval on several occasions.

In only 20 years of presence on the French market, ZIMMATIC has become a recognized Premium solution, with ¼ of the Pivots market share. The group continues its development by focusing on connected technologies: VRI (sprinkler dose modulation), FieldNet Remote Management, FieldNet Advisor decision support.

Login to Soverdi
Reset Password
Enter the username or e-mail you used in your profile. A password reset link will be sent to you by email.